Introduction
Articles written by format two columns. Introduction need to be given a title Pendahuluan [Times New Roman, 12pt, Bold] written immediately after the keywords. It described with the previous state of the art research. At least 5 pieces of literature can be able to justify novelty, overcome a problem, urgency and rationalization of activities, literature review, problem-solving plan, and hypothesis development, analysis GAP, solution to problems, renewal of science, reference to primary sources, describe objectives and hypotheses at the end of the introduction [Times New Roman, 12pt, Normal, Single Spacing].

References
References need to be given a title Daftar Acuan [Times New Roman, 12pt, Bold]. Reference sources of at least 10-15 with 80% of literature published in the last 5-10 years. References must refer to the seventh edition of the American Psychological Association (APA) publication manual. All sources listed in the reference must be in article scripts using reference applications such as Mendeley, Zotero, EndNote.

Footnotes
Try to avoid the use of footnotes.

Figures, Diagrams & Tables
Place diagrams, figures, tables and pictures should be centred and in correct location in your text. Each diagram, figure, table, and picture are presented in 1 column format which placed on the top or bottom of the page. They should have a title using the following guide: Figure 1: Title [Times New Roman, 12pt). The grey scale images is preferred. When using labels within a diagram, figure, table and picture please ensure that labels have horizontal orientation.

Articles are written in accordance with the Manuscript Templates provided. 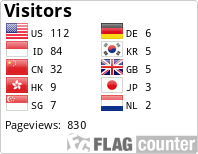